For the first book review in what I hope to become a series, I will be discussing this book, Trinkets & Charms: The use, meaning and significance of dress accessories, 1300-1700. 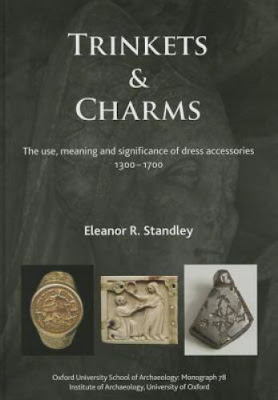 This book is one I've had my eye on for a while, as it covers dress accessories in the southern part of the Welsh borders. This is the area I mostly reenact in. However, I predominantly have to use generically-UK (which, in practice mostly means generically-English) evidence as there is a dearth of medieval archaeological digs in this region and even fewer which are published and publicly available.

The book takes an interdisciplinary approach to studying dress accessories, using both extant finds (from archaeological digs and metal detectorist finds reported on the Portable Antiquities Scheme (PAS)) as well as textual evidence and art. The finds are considered not from the perspective of their materials, manufacture and design-based chronology (as in most archaeological small finds reports) but from the perspective of who used them and what did they mean to the people who used/owned them. This is considered thematically, focusing on the themes of: relationships and romance; sexuality; devotion and pilgrimage; illness, healing and protection; objects trouvés and heirlooms; and death and burial.

Let's get one thing out of the way to start with: do not buy this book thinking you're going to get a catalogue of all the finds discussed. This book is specifically not that sort of book. It is fairly richly illustrated with full-colour photographs. However, only a handful of the finds are illustrated and not all are discussed in any extent beyond appearing in a table or graph, e.g. of frequency of accessory type in different types of site. However, where applicable reference is made to the PAS number of the find, so you can look up this information for many of the non-archaeological finds referenced.

However, if you are not thinking you're going to get a finds catalogue, this book is probably going to suit you quite well. It does what it says on the tin (i.e. explores uses, meanings and significances of finds). And when the author is describing finds, she is clearly in her element. Those parts of the text really flow. That said, I have quite mixed feelings about this book. On the one hand, yay! More interdisciplinary work! Lots of nuanced discussions about the realities of these objects as they were when they were 'alive' and used. On the other hand:

1) The author needed an editor. She cannot tell the difference between a subclause and a clause and frequently tries to treat the former as if they make a full sentence. This is frequently irritating and fairly often makes things quite confusing. She confuses purse hangers and purse frames (which are very different find types). Also, not every citation has made it into the reference list, including 'Heley 2009' which is cited quite frequently.

2) There is no clear discussion of chronology and sometimes (as is sadly all-to-frequent with such books) a blurring of what happened at certain times. For example, on p. 48 the paraphrased quote from Robert Brunne c. 1303 of dresses having trains long enough for devils to sit on is paired with an illustration of this idea in Jean Miélot's Miracles de Nostre Dame c. 1456. This is used to back up the statement that after the mid-14th Century "over gowns became very long". However, the first quote is too early to back-up that statement and there is, in fact, a period c. 1350-1400 where 'puddling' hems and trains do not appear to have been fashionable. Indeed, hems were longer in the c. 1300 period than for much of the 14th Century.

3) A lot of the evidence falls towards the latter end of the date bracket (another sadly all-to-frequent issue with books like this). I get that there is a lot more evidence available for the 15th-17th Centuries than the 14th. However, a balance still needs to be met and it's not really met here. If (like me) you're mainly reading for the 14th Century stuff, you won't get huge amounts out of it.

4) Her scholarship could be better. She has fallen hook, line and sinker for the old "medieval people wore corsets" myth. She states on p. 49 "The development of fashion in the following three centuries [after the late 13th Century] meant that ... laced clothing allowed clothes to be tightened and the body to be constricted. ... This physical alteration of the body was central to sexual desire and corsets and bodies were used to create the perfect female torso shape. Corsets were a staple part of the fitted clothing fashion and in Queen Phillipa's wardrobe account from the 1330s, a lined corset is listed..." This conflates the 14th Century corset (which no one really knows what it was, except that both men and women owned/wore them) and the fashion for tighter-fitting clothes from the mid-14th Century with 19th Century corsets and tight-lacing (i.e. using a corset to drastically reduce the size of the waist). This is a well-known myth and an academic writing in 2013 should really do better than to fall for it.

Another example is her use of ballads as evidence. She cites The Cruel Sister / The Twa Sisters on p. 36 in evidence for courting tokens, which is reasonable (if at the later end of the book's date bracket) given its first written version dates to 1656. However, on p. 55 she cites Mary Hamilton as evidence for "gold strings worn in the hair". Whilst commonly thought of as a 16th Century ballad, as it contains the names of two the four girls named Mary who were chosen to be Mary Queen of Scott's ladies in waiting, the story of this ballad best matches that of Maria Danilova Gamentova, a mistress of Tsar Peter I the Great who murdered her illegitimate child in 1717. Thus, not very good evidence for pre-1700 dress accessory use in the UK. This shaky and at times rather dubious scholarship makes me doubt the rest of the book, where it covers topics I have less knowledge about.

In conclusion, this is a pretty, well-presented book with many full-colour images. It tackles a side of dress accessories that is rarely explored by archaeologists and two regions that have been under-represented in archaeological investigations. It also attempts to take a broad look at the late medieval and early modern period without placing artificial distinctions based on 'medieval' versus 'modern. For all of these things, it should be commended. However, it sorely needed a good editor and, in all probability, a co-author who was a specialist used to using textual and art evidence. Lacking those, it remains a rather flawed book.