It's been a while in coming, but I started feeling guilty about my terrible lack of blogging. Also, Emil has re-started blogging over here at Panzarsork, so I thought maybe I should re-start a bit of blogging, too. This series discusses making my husband a new tunic, which was done for Visby 2019, so nearly a year ago now (I said I'm awful at blogging -- this isn't even my most-delayed blog project.) Anyway, with no further ado, here is the next post.

As I described in the previous post of this series, I had decided on making a garment inspired by Herjolfsnes 43 because it has a fairly slim hem circumference (for a Greenland garment) and therefore better matched the pictorial research I'd done previously. Before I could draft a pattern, I needed to go back to the books - Woven into the Earth (WitE) and Medieval Garments Reconstructed (MGR).

I managed to extract a few measurements for No. 43 out of the books. Namely:


I also identified the features of No. 43 that I was not going to be copying. These were:
Therefore, this is much more 'inspired by' No. 43 than a true 'copy'.

Armed with these measurements, and my husband's measurements, I used my ratio system for creating Herjolfsnes-style garments. I drew up a cutting pattern ... and promptly found that I didn't have enough fabric. 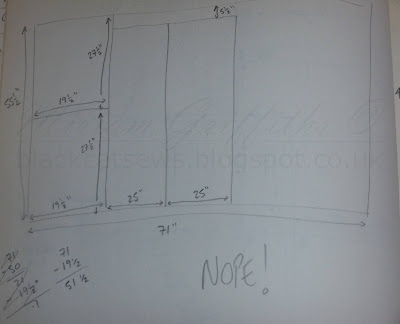 A quick email to the lovely Kerstin at Medeltidsmode sorted that and within a week or two I was the proud owner of 3m of beautiful mustard yellow wool melton.

I drafted up a cutting pattern, cut into the garment, draped it and ... promptly realised that I'm an idiot and had forgotten how Greenland side gores are patterned. Namely, if there are four side gores, one is cut as an equilateral triangle (split with a false seam) and the other two are right-angle triangles that are seamed together. Stupid me had cut these gores as three equilateral triangles and two right-angle triangles seamed to make 'one' gore.

Hence my cutting diagram now has "don't do like this" written on it... 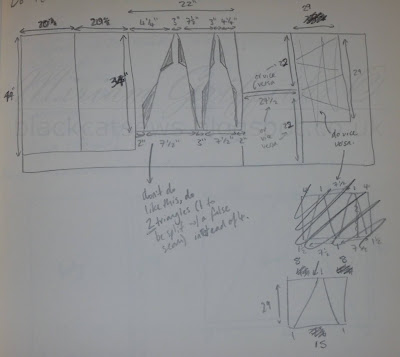 This is what rush-sewing a month or two before Visby causes.

It also causes the complete lack of in-progress photos that I have for this project.

However, in my next post, I will finally give you pictures (!). I managed to finish-enough-to-wear the tunic just before our group's photoshoot, so I actually have decent photos for once.