So, having got burnt by a previous flax fibre purchase, I tried once again to find some affordable line flax for sale. As you might guess from the title, once again this did not go entirely to plan. This is what I got: 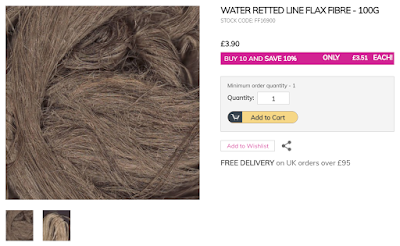 First, let's back-track a little. What is line flax and how does that differ from other flax?

Well, line flax is "proper" flax: the long fibres that extend from root tip to step tip. It is the traditional preparation of flax used for spinning nice threads. A bunch of line flax is called a strick. The other traditional type of flax is tow. These are all the short, broken, tangled, knotted and otherwise not-great fibres left as waste when line flax is prepared. Tow was used for making poor-quality thread as well as rope.

Modern fibre preparations have given us an extra type of flax. This is where the flax fibres are processed but are then chopped up or otherwise broken into shorter lengths. This is done either to make the flax more manageable to hand-spinners who are used to spinning wool or to make it able to run through industrial spinning machines designed for cotton. The latter reason is why doing this to flax (and other bast) fibres is called cottonisation. You generally know the flax fibre you are buying has been cottonised a) if it is described as "silver" or "top" and b) by the price. However, cottonised bast fibres cannot be spun from a distaff in the traditional manner, so they are useless for medieval reenactment purposes.

Members at the Evangelical Church of Distaff Spinning offered me some advice for buying line flax and I ended up with five main choices:

Due to the budget of my project, I took a punt on the George Weil flax, the only machine-processed flax of the lot. I was careful to buy the water-retted flax, as the dew-retted flax was both cheaper and described as "sliver", so is likely cottonised.

First things first: the flax came in three 100g bags, rather than 300g in one bag. 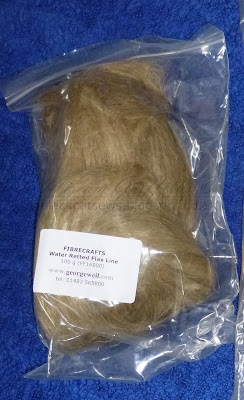 So far, so good. However, the flax in these bags appeared to have got rather tangled. I found an end and started to coax the somewhat matted lump apart. 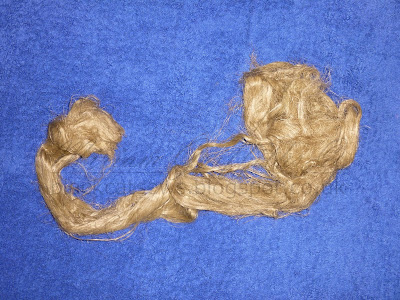 Once the entire tangle was coaxed apart, this is what I ended up with. 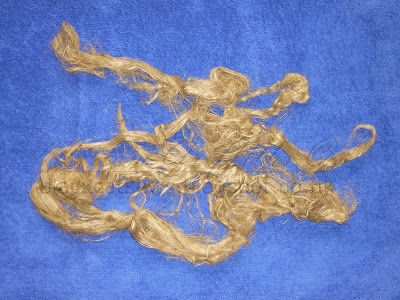 As you can see, this is not a strick or stricks. I.e. it is not made up of neat bundles of aligned full-length fibres (that represent the amount of fibres derived from one handful of flax stems). Instead it appears to be a length of machine-extruded fibres, not dissimilar to roving. Unlike flax sliver or flax tops, the fibres were approaching full length. However, unlike a true strick, they were not all aligned. Instead, they were continuously overlapping. 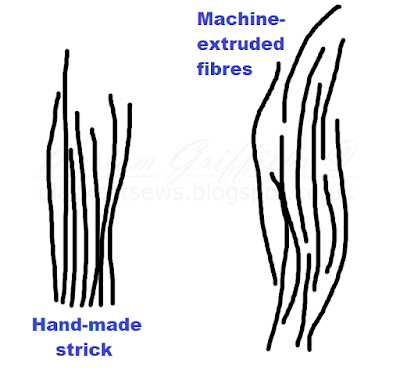 This is problematic for distaff spinning, as it means there is nowhere you can tie a ribbon to that will grip (nearly) all of the flax fibres. Therefore, as some flax fibres will be tied by the ribbon and others won't be, they will not all provide the same resistance when drafting. This risks the fibre coming out in lumps. That will make the spinning process more fiddly and frustrating and make the thread more likely to be lumpy and uneven.

However, before I could even start worrying about that, I had to deal with the snarly mess that these fibres were in. I followed the process I learnt at the most excellent flax processing workshop at Flaxlands. They had showed us how to hackle flax both with traditional hackles and (for small batches) with a comb. There, we used small hand-held hackling combs, which are not dissimilar to the metal combs used on dogs. Lacking one of these, I used the wider-toothed side of my medieval hair comb.

(Small Health & Safety note: flax fibres contain bacterial and/or fungal spores from the retting process. These can be made airborne during fibre processing. Work in a well-ventilated area and if that area is indoors, clean it well afterwards. If you have asthma and/or allergies, be particularly careful and consider wearing a dust mask for this process.)

Firstly, I gently teased out one 'chunk' of fibres from the snarly mess that had been in the bag. (I started with the most obvious 'chunks' and worked my way through.) I worked on a towel, as flax processing is very dusty. However, a smoother fabric (e.g. an old sheet) would have been better as the comb did tend to catch in the loops of the terrycloth. If you can work outside (and it's not windy), I'd recommend doing that. 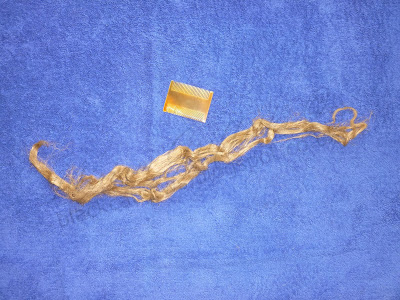 Following the instructions I received at Flaxlands, I gripped a chunk of flax near its middle by wrapping it around my index finger and pinching against that finger with my thumb. This allows a firm grip. It also avoids gripping against the palm of the hand, which tends to be sweatier (moisture activates the natural 'glue' in flax fibres and makes them stick to each other).

I combed it firmly but gently, using the same technique I'd use on long hair. I.e. start about 4" from the end, detangle that, then move to about 8" from the end, detangle that. Repeat the process, moving slowly from tip to gripping hand, detangling each 4" or so bit thoroughly before moving on to the next. It is important not to start near your gripping hand, as combing from here will push the tangles into each other, making them worse. 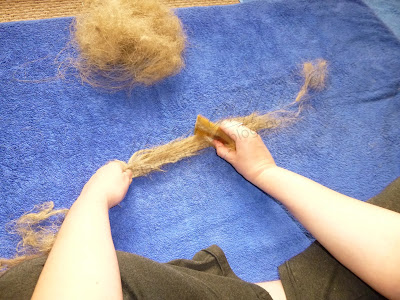 Eventually, I had a chunk of fibre that was thoroughly detangled from its centre (where I'd gripped it) to its right-hand tips. I also had a small pile of what was effectively now tow, i.e. fibres too tangled to use for spinning nice thread. 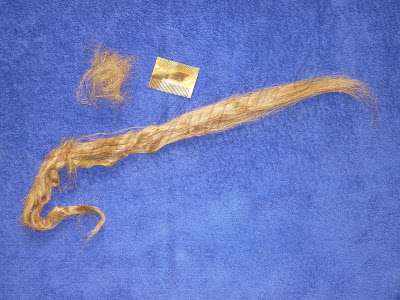 I then turned the chunk of fibre around and repeated the process, making sure I did not leave an uncombed bit in the middle where I had been gripping it. This was the result. 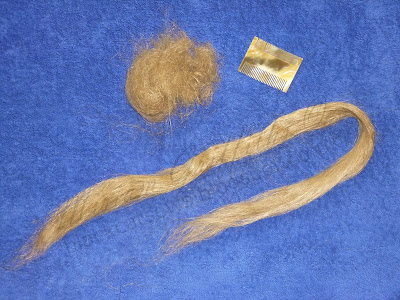 I then repeated the process, separating out obvious 'chunks' from the snarled fibre and hand-combing them. This is what I ended up with.

I then twisted up each 'chunk' as you would a strick of flax, so that it could be safely stored. (The eagle-eyed among you will notice that I used some of the 'chunks' before remembering to take the photos of them all twisted up.) 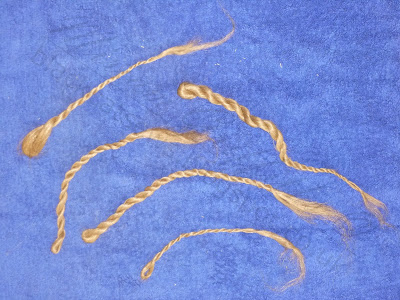 The whole process took me an hour and a half. I felt it was best to go slowly rather than rush. My experience with combing long hair suggests that trying to rush this sort of thing only results in ripping through tangles (and thus broken hair, or flax in this case).

I weighed the pile of tow and found it was 34 g. Thus, I lost a full third of the flax fibre in the process of re-combing it. Hardly ideal!

That said, I do think the George Weil water-retted line flax is still worth buying, simply because it is so much cheaper than anywhere else yet it is not cottonised. Even if you factor in the fact that 100 g of boughten fibre equals about 65 g of usable fibre (after reprocessing), that makes it approximately £6 per 100 g of usable, post-reprocessing fibre. Hand-processed flax is always going to be far-and-away better than machine-processed stuff. However, it is priced accordingly. If that price is outside your budget and you do not have the opportunity or ability to process your own flax, the George Weil water-retted line flax is one of the best options currently on the market.

Happy spinning, folks! Please do let me know if you try the George Weil water-retted line flax or if you know of any other sources of line flax.
Posted by Miriam at 10:51