Historical Sew Fortnightly: #3 Under It All

Like many others, I have been caught up in The Dreamstress' Historical Sew Fortnightly Challenge. 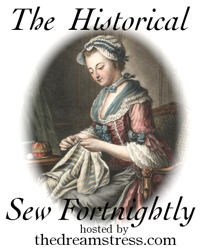 So, today is the deadline for challenge #3: Under it All. Having failed miserably at challenge #2 (Unfinished Objects), I decided that since my UFOs were shifts that I could promote them to challenge #3 and try to get them finished anyway...

Unfortunately, my camera finally died today so I can't give you any photos of the finished garments. However, I do have some 'before' photos that I hope will suffice for now.


As I said, I had 2 shifts. Shift 1 is my old shift - much abused loved, much worn, it was the first historical garment (well, actually first garment) I ever sewed. Thanks to the rules of my reenactment group, it is 100% linen and thanks to my now-husband's ability to spot a bargain it is purportedly made from fabric sold off when the last Irish linen mill shut. Now, tall tale or not, it is very nice fabric and worth keeping.

Unfortunately, it suffered the brunt of my sewing inexperience. The shift was originally patterned following a variation on the 'rectangles and triangles' method of medieval clothes (a rectangle for front, another for back and one equilateral and one right-angle triangle inserted into each side seam). However, the sleeves got pinned in with an attempt to make them more fitted and got royally screwed up (hint: never let two people pin in one sleeve each - it won't save you any time in the long run). I ripped one armpit out the first weekend I wore it, bodged a kite-shaped gore into it and wore it for several more years. I then gained weight and had to loosen the sleeves (thank goodness for huge seam allowances!). I then gained more weight and had more problems with the sleeves, so planned to take them off and re-set them.

I wanted to use the original fabric to alter the shift, as it is such good quality stuff - slightly thick, but a wonderfully dense weave which doesn't fray (even on the bias) and wears very well. However, I only had an approx. 10" x 40" strip plus some small scraps (no more than 5" x 5") left, so things were very tight.

First I unpicked the wrist-to-cuff seam on each sleeve and unpicked the cuff hemming. I then ironed the sleeves flat. The only way to fix the sleeves that I could think of was to reproduce the original trapezoid shape of the sleeve piece by sewing fabric on, then re-pin that back into the armscye as if it was a new sleeve. This would retain the anachronistic semi-fitted, pinned-in form of the shift, but this was necessary as the dress it goes under has (slightly anachronistically) tight sleeves.

I traced the shape of the top of the sleeve onto paper and planned the shape of fabric needed to reproduce the original trapezoid. I then carefully used these paper patterns to cut my fabric (as I was so low on fabric). I then sewed these onto the original sleeves using whip stitch from the right side as I couldn't figure out how to contort the fabric to permit me to sew a normal running stitch seam.

Due to fabric constraints, I had to do the reconstruction from two pieces of fabric, sewing them together in the centre with the same seam type. I chose to add ~2" length as the sleeves had always been a little short and tight and this would fix both problems.

Once the sleeve pieces were reconstructed, I put the shift on and my husband pinned the sleeves into the armscye and re-pinned the armpit-to-cuff seam. I also added an ~4" square gusset into each armpit to help with movement issues. All seams were sewn with running stitch and flat-felled to one side and whip stitched down. Finally, the cuffs were re-hemmed. It was finished just in time!

The challenge: #3, Under it All.
Fabric: 100% linen, undyed, purportedly real Irish linen.
Pattern: none (original shift made from measurements, method of mending completely made up).
Year: 1370, but would be good for several centuries previous too.
Notions: 100% linen thread from Naturtuche (I don't recommend it - it is annoyingly slubby), beeswax.
How historically accurate is it? 50/50. The fabric is good. The new thread is good (though my original stitching is with Guttermans' polyester). The stitches are of correct type and size. Rectangular construction is good. The semi-fitted sleeves are most likely an anachronism. The method of mending certainly is, as the mistake is not one that would have been made historically. However, the spirit of mending and altering is certainly authentic!
Hours to complete: No idea for the original shift. For these alterations, 1/2 to 1 hour to plan how to use my limited fabric then 23 hours to implement. This is the first time I've ever recorded my hours and I'm a little shocked...
First worn: Originally, I think Easter Bank Holiday 2007. With alterations, not yet worn.
Total cost: Originally, £5/metre linen with ~3 metres used on this. Maybe £2 for Guttermans' thread. Now, a pound or two maximum, for making a small dent in my beeswax and gigantic reel of thread.

Shift 2 was a much simpler affair. It was the shift that went under my posh blue 1370s dress that I/my husband made for our wedding. It was made with proper rectangular construction (no fitting to the armscyes) in 100% bleached linen but with machine-sewn seams with cotton thread disguised via hand-sewn seam finishing in 100% linen thread. As all of our wedding clothes got rather rushed, the seam bindings had not been finished on and the neckline had been hemmed some time in (I think) the 48 hours before the wedding (possibly on the morning of the wedding... I don't quite remember) using regular cotton thread.

I re-hemmed the neckline with waxed 100% linen thread. I also bound the seam allowances of the armscyes and underarm gores. These used the 'press the seam allowances to opposite sides and fold each over' method and were whip stitched down. I used a slightly anachronisticly low stitching density to match the stitching I'd done before the wedding.

The challenge: #3, Under it All.
The fabric: 100% linen, bleached. I actually hate it - it reminds me of naff cotton/cotton-blend because it is so white and uniform and it is hard on the fingers to hand sew. I only bought it because it was a) 100% linen, b) bleached, c) not see-through and d) I was running out of time to get fabric for wedding clothes.
Pattern: none, just rectangular construction (still needs some optimising).
Year: 1370, but higher class than the previous one (white linen plus lower neckline).
Notions: linen thread and beeswax, as before.
How historically accurate is it? The pattern is better than the previous shift, but this one falls down by having all seams except the underarm gusset seams sewn by machine with cotton thread. The fabric and hand stitching thread are good. The stitches are authentic, but the stitch density is a bit low due to rushing and a mistaken notion of what is correct.
Hours to complete: No idea for the original shift. 6.25 hours to finish - yikes I must sew slowly!
First worn: My wedding, May last year.
Total cost: Originally, £5/metre (or maybe £7/metre?) fabric, used ~2 metres. A few pounds for a reel of white cotton machine sewing thread. Now, a pound or two maximum for beeswax and linen thread.
Posted by Miriam at 22:05