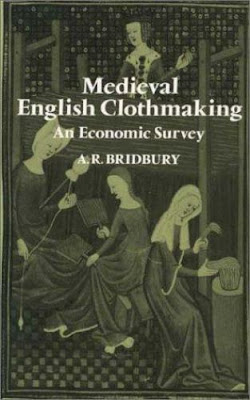 This is a somewhat odd book that I am a little unsure about recommending.
First things first, it's an economic history book. So, be aware of that. For those who have not yet encountered the joys of such books/articles, basically this means that it's potentially very useful but also quite often very dry and and a bit of a slog to read. See: any article ever written by John Munro. I've read several economic textile history articles before, so kinda knew what to expect in that regard.
However, what I did not expect was that this book is ... very obviously one side of some sort of academic argument that was occurring when it was written. A.R. Bridbury is also very very opinionated and not afraid of phrasing those opinions in rather stronger language than I'm used to reading from academics. For example, here is his scathing description of medieval guilds:
"When they were not united for carnival, or gathered together, each incapsulated
in its unassailable autonomy, for the feasting of its members, these gilds seem
to have devoted themselves to the amiable designs of limiting entry into their ranks
by imposing ludicrously prolonged apprenticeship qualifications upon new entrants,
and banishing from the market all the products of unauthorised rivals as well as
all the sub-standard work of members. For undertaking these functions, the gilds
earn the unstinted praise of historians..." (p. 8).
He is also very critical of the previous conclusions of several economic textile historians, particularly E.M. Carus-Wilson.
The book itself consists of eight chapters (barring the introduction) which are essentially seven articles and a conclusion. They are as follows:
It's hard to take everything in these chapters at face-value, given how opinionated the author is and how this book was published in the early 1980s and I have no idea where this particular argument stands currently in academia. However, it covers a lot of useful and interesting information. Also, I have to say Bridbury's arguments are convincing.
In addition to the chapters, there's also six appendices, many of which are themselves really useful. They are as follows:
Overall, I would recommend this book as it does have a lot of useful information, both in the appendices and in the chapters. However, I'd only recommend it if you are pretty interested in / serious enough about medieval textile research. It's certainly interesting and useful, but certainly not a "medieval textiles 101" or even a "medieval textiles 201" sort of book. Also, you'd be well-advised to take the author's conclusions with a sizable pinch of salt and try to look up whether anyone has written any counter-arguments in the past 40 years.
Title: Medieval English Clothmaking: An Economic Survey