The fourth book of this review series and the first that I do not recommend. 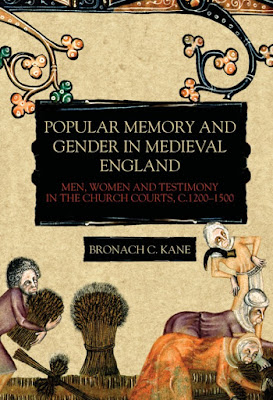 This book is about the way people in the medieval period remembered things and how that different between men and women. Church Court testimonies are used as the primary source for exploring and demonstrating this. I've read some really interesting stuff previously about memory and what medieval people thought of as a 'memorable event' in their personal past - particularly the article 'Memory and Proof of Age in England 1272-1327' by John Bedell. That used 'proof of age' court cases to explore this. I thought this book might do something similar, so I took a gamble on it when Boydell & Brewer had a sale.
It ... sort of does a similar thing. Sadly, it is not half as interesting or useful as that John Bedell article.
My main problem with this book is its focus. It does not, sadly, primarily focus on the things medieval men and women found important and referred to in their testimonies. Instead, it is in fact a quite high-level (perhaps at least PhD student level) book whose primary focus is memory from a theoretical sociological perspective. It consistently uses the sort of very high-brow sociological language such as "discursive space" and "subaltern people" and "hegemonic values". Quite frankly, it lost me pretty much from the start.
My other significant problem with this book is the way it uses the sources. The primary evidence was scattered throughout the book, with never more than a paraphrased snippet or two in any one place. Whilst each reference to a Church Court testimony was referenced in the footnotes with the relevant roll, it would be quite a task to try to cross-reference all these references as they often crop up multiple times within the book. Sometimes a little of the testimony is cited (in the footnotes), but only in Latin - no translation is provided. Untranslated Latin is a big bug-bear of mine. I really don't think it's reasonable to assume that everyone interested in medieval history can read Latin (especially as, at least in the UK, being taught Latin is very much a class issue). Additionally, when the text does refer to particular testimonies, it often does not cite their date or the part of England it is from. This makes the book even less useful from an amateur/re-enactor perspective.
There are a few potentially useful references in this book regarding daily life and gendered life experiences. For example, one court case provided an example of two village women who breastfed each others' baby. This was done not as a wetnurse scenario but that the women alternated, so that one woman could look after both babies whilst the other was absent (presumably working or similar). However, this very scant smattering of miscellaneous vaguely useful things does not outweigh the fact that it is a really difficult, really inaccessible read and it is not at all written in a way that enables you to easily determine when and where each case is from or what the details of the entire case were.
Had I been able to read this book before buying, I would not have bought it.
Title: Popular Memory and Gender in Medieval England: Men, Women and Testimony in the Church Courts, C. 1200-1500