The third book of this review series! 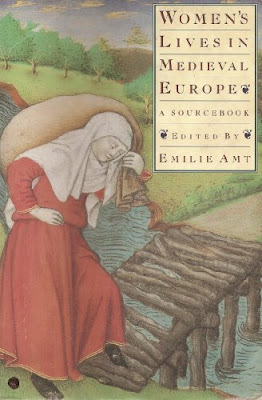 First things first: this is a sourcebook. For those of you who have not encountered that term, it means a book comprising short-to-medium-length quotes from primary sources relating to the theme of the book. Sourcebooks are a very useful way to get access to a lot of primary sources relatively inexpensively. They are a good starting point for looking at primary sources, but obviously you only get the sources (and the particular paragraph- or page-worth of them) that the editor thought was relevant. So, much depends on the theme of the book and the skill of the editor.

This sourcebook covers the whole of Europe and focuses on women's lives. The chapters are as follows:


As is common for sourcebooks, each source is given a brief paragraph to introduce it. Unusually, however, written sources are not the only source in this sourcebook. There are also a few images from archaeological reports that show excavated floorplans of medieval buildings and/or artists' reconstructions of how those buildings may have looked in use.

Overall, this is a really, really good book. It includes the whole medieval period (from the 6th C to the 15th C) and doesn't scrimp on the pre-11th C stuff. There's an excellent mix of types of source and it very much does not just look at the rich and powerful. Overall, it makes a very good introduction to looking at women's lives through the medium of primary written sources. I particularly like how the 'working life' chapter includes some sources about serfs (rather than just townspeople and the craft and mercantile trades) and how the 'religious life' chapter includes more lay/informal religious lives (i.e. beguines, anchoresses and mystics) rather than just the formal religious lives of nuns. I adore that so-called 'outsiders' are also considered (and considered with sources from their own communities), rather than just looking at the orthodox Catholic majority (or looking at them through the eyes of that majority).

My main criticisms are as follows. Firstly, all of the sources are only presented in translation (rather than presenting both the original and the translation, as in some other sourcebooks). This, of course, leaves you at the mercy of the translator. I didn't notice any screamingly wrong translations, but no translation can be perfect and one should always remember this. Secondly, some of the sources appear to have been chosen for ease of inclusion rather than because they were the best ways to get this source. For example, the biblical quotes are from the Revised Standard Version of the Bible, not from a medieval bible in translation. Thirdly, some of the editorial commentary is a little dated. I found the line in the introduction that said "one of [The Crusades'] unintended effects was the widespread persecution of the Jewish minority in Europe" to be a bit glib and apologist. There's also several references to the Black Death killing a quarter to a third of the European population, whereas more recent estimates put that as quite a bit higher. Finally, I'd have liked more editorial comment on the artists' reconstructions of buildings as it was unclear what assumptions had been made when drawing them.

None of those criticisms, however, are significant enough to prevent me from wholeheartedly recommending this book. It's a really good collection of sources and very affordable if you get it second-hand. Overall, a very good addition to your bookshelf if you are interested in medieval women. (Note: a second edition is now available, which is expanded and probably even better. This review relates to the first edition.)