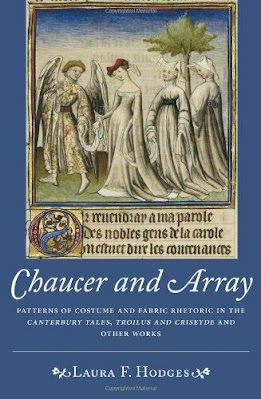 This book discusses the way Chaucer uses costume and fabric (and plays with reader expectations of costume and fabric descriptions) to provide characterisation, further depth to the plot and/or to characterise himself as an author. It covers a variety of Chaucer's works, as specified in the title.
However, note: it does not include the General Prologue of the Canterbury Tales. If you are looking for an analysis of that, do not buy this book. For that, see two other books in this series by Laura F. Hodges: 'Chaucer and Costume: The Secular Pilgrims in the General Prologue' and 'Chaucer and Clothing: Clerical and Academic Costume in the General Prologue to the Canterbury Tales'.
Now that we've got that out of the way, let's discuss this book. It's really, really interesting and also really readable, which is always a plus. The book clearly demonstrates a) how clever a writer Chaucer was, b) how incredibly well-read at least some of his audience was expected to be and c) how you'd be an absolute fool to do any sort of costume analysis of fiction written in the medieval period without having a very good understanding that costume cannot always (and, indeed, I would say possibly never can) be taken at face value as simply a description of what a real person of that status and situation would wear.
The chapters are as follows:
All in all, I'd very much recommend this book if you are stepping beyond the basic 'amateur medieval costume enthusiast' selection of books and you want to explore medieval costume in textual sources. It's a very readable book and, as well as providing many interesting examples of how costume and fabric are used in Chaucer's work, clearly demonstrates some of the potential pitfalls waiting for the inexperienced interpreter of this sort of source. My only proviso is that (as I said at the beginning) if you are interested in an analysis of the General Prologue of the Canterbury Tales, don't expect to find it here.
Title: Chaucer and Array: Patterns of Costume and Fabric Rhetoric in the Canterbury Tales, Troilus and Criseyde and Other Works