I'm afraid work and hot weather mean no actual interesting things of my own to report on.

However, in more Lengberg-related news, Cathy Raymond has written an interesting blog post about late medieval underwear, specifically the Lengberg pants and whether they are a male or female garment.

She also links to a recent PDF by Rebecca Lucas, who has hunted through the literature to answer one of the great mysteries of late medieval underwear. Namely, the source of the sleeveless "chemise of the fourteenth century" shown in a black-and-white photograph in Kohler's "A History of Costume": 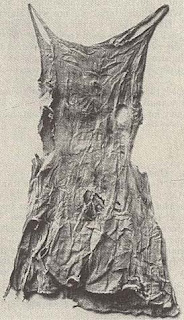 It is from a cash of objects found during building work in 1867 in Burg Rahnis, Thuringia, Germany. It is described as being made of coarse linen, not silk as has been previously speculated, with "inserted wedges on both sides" (translation by Rebecca Lucas). It was kept in a private collection, possibly the museum at Burg Rahnis - however, this museum was sacked in World War II and its contents stolen. The whereabouts of the shift is currently unknown.

However, that's a lot more information than I previously had - simply that it was lost in World War II.
Posted by Miriam at 21:03