In line with my previous attempts at the Historical Sew Fortnightly/Monthly challenge, I'm starting a new year with actually doing the challenge. Let's see how long it lasts this year... ;)

Procrastination was right up my street (*looks balefully at stack of UFOs*). For this challenge, I picked up a ball of delicious dk-ish weight Gotland yarn that's been sitting in my stash unused for approximately 7-8 years (!). 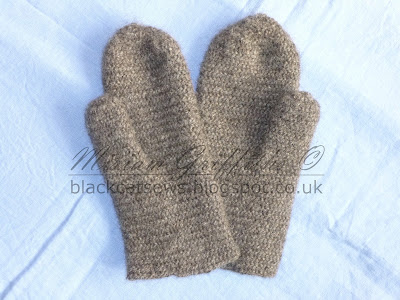 Before this project, my naalbinding skills were passable. I'd done two pairs of very short socks in Danish stitch ages ago. However, I'd never really learnt to do naalbinding well and I'd never learnt the on-thumb method that is pretty essential for doing the more complicated, documentable stitches.


To learn the on-thumb method, and some authentic medieval stitches, I went to the most excellent website, Neulakintaat, by Sanna-Mari Pihlajapiha. She has the most comprehensive and accessible compendium of naalbinding stitches that is on the web.

I chose the Oslo stitch (Hansen notation UO/UOO F1, Kaukonen notation 1+1) as there are two extant medieval mittens that use this stitch, one of which is from the 14th Century:

Looking at these mittens, I can see two key features: a rounded start for both mitten and its thumb; a mitten that is wider below the thumb than above it but that does not have major taper below the thumb.

I followed the instructions on Neulakintaat for a round start with Oslo stitch, how to make a thumb and how to finish at the cuff. To get the increase in width below the thumb without major taper, I simply made the hole for the thumb with more stitches (~15 stitches) on the lower side vs. the upper side (~10 stitches). I then decreased in the corners when making the thumb to ensure the thumb did not end up too large. I did not do any increases in the mitten itself, barring those used to make the round tip.

As suggested on Neulakintaat, I worked the two mittens simultaneously, stage by stage, to ensure that the mittens were identical. This also dealt with the dreaded "second sock (or, rather, second mitten) syndrome" and ensured that this project did not become yet another UFO! Not only that, but I actually finished them more than a week before the challenge deadline (although hadn't managed to photograph them until now.

The Challenge: 2016 #1: Procrastination
Material: 1x ball of roughly dk-weight Gotland (grey) yarn
Pattern: none, but using instructions on Neulakintaat
Year: 1370 ish
Notions: none
How historically accurate is it? 75% ish? The pattern is good, the stitch is correct but I'm unsure of the yarn (e.g. ply, twist, thickness) and Gotland is an improved version of the Gute sheep breed that was around then so it is not directly comparable (and even then, I'm not even sure if the Gute would be the sheep of choice for a project like this in the 14th C).
Alternatively, about 0% as I do Welsh 14th C not Scandinavian and there are no examples of naalbinding in Britain (barring the Jorvik sock of c. 10th C which is likely a Scandinavian import). Ah well. *sigh*
Hours to complete: I honestly don't know as they were done in fits and starts over nearly 2 months. At a very rough guesstimate, between 10 and 20 hours?
First worn: If you don't count showing them off in the house, then not yet.
Total cost: I can't recall what the yarn cost but to buy now it'd probably be about £10-20 (GBP) per ball and I used just under 1 ball.

Unfortunately, this project did't entirely work as a stash-buster as I still have just over one ball of Gotland yarn left. Hmmm... what to do, what to do?