A linen belt for a peasant: or, the belt that wasn't

Every once and a while with this hobby, you end up making something -perhaps even putting a lot of effort into something- only to realise that it's actually completely wrong. Some people choose to just keep it anyway (after all, you did put a lot of effort into it). Some people chalk it up as a learning exercise - after all, you now know more about what people didn't do, which is sometimes as important as knowing what they did do.

This is a blogpost about one of those projects...

It all started with a piece of legislation. Many of you will be familiar with the English sumptuary law 'Statue Concerning Diet and Apparel, 1363'. For those of you who are not, this was a piece of legislation introduced in England in 1363 (and repealed only one year later). It listed the types of clothing that people of certain classes and wealth were permitted, by law, to wear (and the foods they were permitted to eat). Although its rapid repeal suggests the law had little practical impact in England, the presence of the law does give an interesting insight into what Parliament, and a certain sector of society, thought people should be doing.

For a full transcription of the clothing-related section, as well as a very interesting comparison with fabric prices of the time, see this excellent thesis by Sarah Kelly Silverman.

The majority of the 1363 legislation concerns people of middling status and above (i.e. grooms, lords' servants, yeomen, craftspeople, merchants, town citizens, burgesses, ecclesiastics, gentry, nobility and royalty). I.e. it concerns the sort of people who were likely to have sufficient wealth to be able to 'dress above their station'. However, there is one statement about lower class people which I found interesting. In full (quoted from Silverman's thesis):


XIV. Item, That Carters, Ploughmen, Drivers of the Plough, Oxherds, Cowhers, Shephards,
[Deyars, (swineherds, dairymen,)] and all other Keepers of Beasts, Threshers of Corn,
and all Manner of People of the Estate [of a Groom, attending to Husbandry,]
and all other People, that have not Forty Shillings  of Goods, nor [of Chattels,]
shall not take nor wear no Manner of Cloth, but Blanket, and Russet of Twelve-pence;
and shall wear [the] Girdles of Linen according to their Estate; and that
[they come to eat and drink] in the Manner as pertaineth to them, and not
excessively.

Blanket was a wool cloth that was usually undyed and white (its name comes from the French word blanchet, itself derived from the French word blanc, meaning white). Russet was another type of wool cloth that was typically grey or reddish-brown (its name comes from the French russet, rossat or roset, meaning reddish-brown). Both were coarse, undyed wools predominantly used as clothing by the poor. Thus, it is unsurprising that Parliament (and the nobility who sat there) thought the country poor should wear such fabric.

However, the sumptuary law also mentions 'Girdles of Linen' -- presumably in contrast to other textiles (e.g. wool, silk) or leather. This is interesting and not something I'd seen previously explored. So, I decided to make a linen girdle.

Tablet weaving makes a strong, supple belt and is known to have been used for belts, such as the Belt of Erik of Pomerania. The extant belts are typically silk and very fancy -- unsurprising, seeing as this is what caused them to be kept and survive. However, there are some bits of tablet weaving from the London digs that are less fancy and are of a suitable width to be used as a 14th Century belt.

I chose find accession no. 594 (Fig 100B, p. 133 of 'Textiles and Clothing, 1150-1450'). It was found in trench III of the Custom House (CUS73) site, a waterfront revetment dump dating to the first half of the 14th Century. It is a 220 mm x 8.5 mm strip of silk tablet weaving, cut at both ends. Both warp and weft are Z/S-ply spun silk that is currently dark reddish-brown and tested negatively for dye residues. In the above book (p. 137), the weave is described as follows:


12 four-holed tablets. The 2 edge tablets (i.e. one on each side) were continuously given
a 1/4 turn forwards, 4 alternate tablets in the centre were given two 1/4 turns forward
followed by two 1/4 turns backwards while the other four alternate tablets were turned in
opposition. This resulted in a double-faced weave with a diagonal twill effect.

By alternate it means 'every other'. There is also obviously an error, because it says there were 12 tablets in total - one edge tablet on each side (two in total), four in the centre turning F/F/B/B and four in the centre turning B/B/F/F. Four plus four plus two does not equal 12. Looking at the image in the book (p. 133), it is clear that there are in fact two edge/border tablets on each side and that each edge pair is threaded as S/Z (or Z/S).

Instead of following the book's suggestion of weaving the centre using two packs (one turning F/F/B/B and the other turning B/B/F/F), I instead used tablet threading to essentially reverse the twist being put into every other tablet. So, I set up the tablets as follows:

(I have marked the border tablets apart from the central pattern tablets for clarity.)

I then turned the centre tablets F/F/B/B repeatedly throughout the entire band. I turned the border tablets continuously forwards, as suggested by the book. However, when twist build-up became excessive I flipped them to Z/S, to reverse the twist. You could, of course, not flip them but instead turn them continuously backwards to reverse the twist if that is your preferred method. 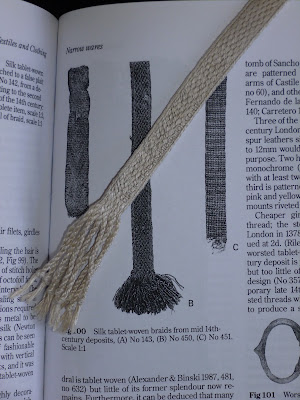 At around 11 mm width, it's not quite as fine as the original find. However, it's a nice belt width.

As you can see, I chose to make the ends tasseled. This was not an attempt to copy the original find (which, after all, is simply cut, quite possibly in preparation for its disposal). I chose to do this as I wanted a very plain belt -- just knotted, with no buckle. Whilst I could have hemmed the end of the tablet weaving, this often ends up quite bulky and the ends can often fray free of the stitching. The short tassel, however, is easy to make, hard-wearing and doesn't add bulk or affect the drape.

To make the tassel, I worked with four threads at a time (i.e. all the threads from a single tablet). I separated them into two sections (each containing two threads). I then twisted each section in the S direction before wrapping the twisted sections around each other in the Z direction. To hold the resulting cable securely, I simply made a single overhand knot in the entire cable at the end.

So, a nice project. Another one in the bag. Another step towards creating an evidence-based portrayal of a lower class person in mid-14th Century England/Wales.

The further I got with this project, the more I couldn't shake the thought that I was Just. Plain. Doing. It. Wrong.

This is supposed to be a belt worn by poor people. By definition, it is supposed to be cheap. That's not to say it necessarily should be shoddy. However, it should be relatively non-labour intensive and non-material intensive to make. Quite probably, it should also not involve anything that requires a high level of potentially trade/guild-specific knowledge.

And anyone who's made anything fine using tablet weaving knows -- tablet woven bands (even simple, plain ones) definitely do not count as low-labour or low-skill.

Moreover, tablet weaving requires spun, plied threads. To make the belt I made, you require fine threads. Thus, there would be a lot of labour involved in this belt were it made in the 14th Century. Namely:


I also started thinking about other people who, in the medieval period and later, wore "linen girdles" and were also supposed to be dressing in a way representative of their poverty -- i.e. monks, friars and nuns. These people often did not wear narrow-weave belts. They wore rope belts.

Rope belts make much more sense as a 'poor' belt. As I learnt when participating in a flax processing workshop at Flaxlands, flax rope can be made from the waste left from heckling flax (the tow). It also can be made in a single step after heckling. This, therefore, both uses low-quality/waste materials and vastly reduces the labour required to get from 'planting flax seeds' to 'having a belt'.

So, sadly, my nice tablet woven linen belt has been retired. Here is my new belt: 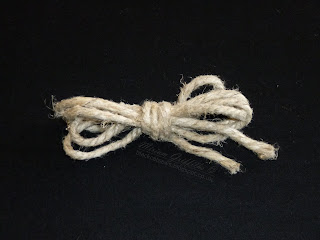 It's a plain piece of bast-fibre rope. I'm not sure if it's linen or hemp as it was recycled -- it's actually some of the rope that the wonderful Medeltidsmode use to bundle up fabric sales when selling at events.

Is it as 'interesting' as a tablet woven belt? No, perhaps not.
Does it allow me to swan around and show off my craft skills at events? Certainly not.
Is it the better, more evidence-based choice? I personally feel, yes.