Continuing in my long tradition of documenting these things rather late, here is my entry for the Historical Sew Monthly 2016, #8 (August) - Pattern.


Having become (for my sins) in charge of such things for my re-enactment group, I had a number of loaner items of clothing to organise the making and/or mending of. One thing that we lack is children's clothing and I figured baby/toddler clothing was particularly in need, seeing as babies grow so quickly that loaner items are particularly useful for them.

Thanks to a number of lovely people on the Age of the Cotehardie FB page, I got some measurements. In particular, Gail Kellogg Hope was very generous with her assistance - she gave me every measurement I needed!

She has a pattern for beautiful cote for a child of 1-3 years, which was based on the Greenland #64 and includes high side gores and curved armsyces. I essentially made a bastardised version of this with completely rectangles-and-triangles construction, due to a) making a generic cote rather than one for a specific individual and b) having quite a considerable fabric restriction on account of recycling my fabric from a large bow bag.

The measurements Gail gave me were as follows:
From this, with a heck of a lot of piecing and patching, I managed to get a toddler's cote: 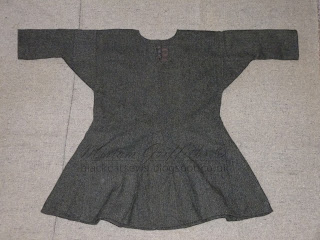 I did take the opportunity to practise sewing Greenland-style centre-front and centre-back gores with the little M-shape at the top of the gores. (These are surprisingly easy to do once you know the trick... but I'll be saving that for another post!) 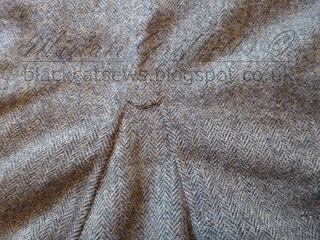 I followed Gail's advice and made the neckline a keyhole shape (seeing as toddlers have such large heads in comparison to their shoulders). However, to give it a bit more of a 14th Century twist, I added three buttons to keep the neckline closed. I'm not convinced the neckhole is quite big enough but, if and when a toddler comes along to the group, that's an easy enough fix to make.

Now for the stats:

Pattern: none, but based on measurements kindly given by Gail Kellogg Hope.

How historically accurate is it? not terribly. The principal issue is the fabric - herringbone twill is rare in general and practically non-existent in the 14th Century, going by the archaeological record. The black-and-mottled-brown colouring is not terribly documentable either. As far as the pattern goes, it's mostly ok except the uncurved armscye, which archaeological finds (e.g. the Moselund Kirtle, carbon-dated to 1050-1150) demonstrate is not documentable for outerwear even several centuries earlier.

Hours to complete: quite a few, mostly due to the inordinate amount of piecing and patching that I had to do and the tessellation games I had to play with the pattern pieces in order to get them out of the fabric.

Total cost: well, the only bit that was not recycled or reclaimed from otherwise binnable items was the black cotton thread. I didn't use anywhere near a whole reel, so it's less than £1.40.
Posted by Miriam at 16:03