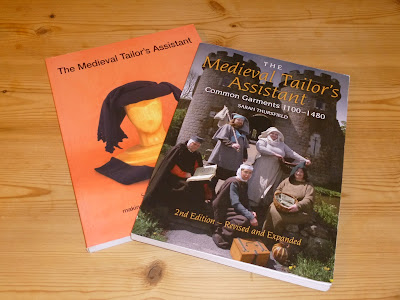 The Medieval Tailor's Assistant (MTA) is a comprehensive resource for theatre, re-enactment, SCA and/or costuming. It covers clothing, underwear, headwear and accessories for men, women and children for interpretations of both upper and lower classes within the given date brackets. The first edition (MTA1) has instructions for choosing a garment, creating a personalised toile/pattern block and adapting that pattern block to create personalised patterns for the various garments. There are also instructions for hand and machine sewing and tips for construction. The book is illustrated with numerous diagrams; numerous re-drawings of original illustrations, brasses and effigies (with full references in each figure legend - huzzah! for this I will love Sarah Thursfield forever!); some black-and-white photographs of garments or techniques; a couple of black-and-white copies of original manuscript illustrations; and a grand total of four colour plates.

The patterns in MTA1 are as follows:

The second edition (MTA2) is not only revised but also expanded so there's more! First you get a whole bunch of new patterns, partly because the new edition also spans the 12th C. The new patterns are:
There's other new stuff including a new (and IMO, excellent) introduction, photographs of suitable fabrics, some new techniques (e.g. tablet woven edging a la the London finds) and absolutely loads of beautiful, full-colour photographs of reproduction garments for inspiration. You can also see that Sarah Thursfield's interpretations (particularly for braies, headdresses and how to pattern for the plus-sized individual) have changed, IMO for the better.

In addition to new stuff, there's also been a major re-shuffle of the chapters in MTA2. In my opinion, this is a great improvement, adds a lot of clarity and makes using it for an entire project much easier. This re-shuffle will be particularly handy for those who're completely new to historic costuming. Some of the date brackets have been narrowed and clarified, IMO correctly. There's also some nice tips on good practice scattered through - e.g. discussing the near-ubiquity of female headcovering, the restriction of particularly daring fashions to the young and rich, etc.

That all said, there are some bits that I feel let the book down a bit. My major criticism is that two of the patterns that are, to be polite, exceedingly odd (the "double armholed doublet", which seems to be a misunderstanding regarding grande assiette sleeves, and the "tight dress or cotehardie" which, utterly bizzarely, involves back lacing and raglan sleeves, neither of which are remotely documentable). Also, I really, really wish she'd be clearer as to which of her patterns are based on extant garments (and exactly which extant garments) and which patterns are theatre costume-based conjecture. Also-also, the formatting, whilst overall very nice, does on several occasions leave one searching for the remainder of main text within the mass of figure legends.

My smaller, rather more nit-picky criticisms are as follows. I personally disagree with her classification of the mid-14th C fashion as belonging to the earlier, drapey, un-fitted grouping (IMO it's its own transitional group and garments such as those worn by upperclass women in the Luttrell Psalter (c. 1325-1340) cannot be considered un-fitted). The grouping of patterns implies distinctions between some garments that are, IMO, evolutions of a single garment rather than separate garments. The horned headdress patterns recommend only light-weight fabric interlining and so all look rather sad and squashy. The way of presenting hose foot styles is somewhat confusing and makes it rather unclear as to which are medieval and which are later. The discussion of frilled veils is exceedingly limited. Finally, there are a couple of odd hold-overs from MTA1 (e.g. the "looped cord" diagram (now, thankfully, not incorrectly described as fingerloop braiding) and the "sleeve and armhole fit" diagram, which implies chronological progression but owes nothing to our archaeological knowledge of actual sleeve/armhole shaping).

My other major criticism of MTA2 is the same as that for MTA1 and not a criticism of the book at all: the reader must understand the aim of the book. It does not aim to tell you about actual historical garments (e.g. patterns based on extant garments). It does not aim for "perfect authenticity" (whatever that is) or to definitively characterise medieval garments. If you go looking for any of those things then, yes, of course you're going to be disappointed. The aim of MTA is to guide someone so that they can create a reasonable interpretation of an outfit for re-enactment or theatre use without having any starting knowledge (and, though it's not out-right stated, it's also only English medieval styles not continental). Therefore, the guide basically shows you how to make patterns that a modern seamstress would recognise. There is no draping (beyond making the toile) and the patterns are all (with exception of the pre-1340 ones) cut in the modern, highly wasteful manner of having the skirts as-one with the rest rather than using gores. (Although, yes, history doesn't equivocally controvert that - the Golden Gown of Queen Margareta (c. 1403-1439) is cut like that.)

Overall, this is an absolutely excellent reference book, albeit with a few flaws. That said, its usefulness will very much depend upon what you're doing. So, my recommendations would be:

I'm a beginner to historical costuming, want to make medieval costumes and don't have MTA1:
BUY IT! BUY IT NOW! Unless you want to do specifically non-English styles, this is going to be an excellent starting place for you and a resource that you can go back to time and again regardless of what you're doing (re-enactment, LARP, SCA, theatre - whatever). It'll be particularly good for you if you are familiar with modern dressmaking and are frustrated by being unable to find patterns. I also highly recommend you pay that extra and get the second edition - the corrections and extra patterns really make the second edition so much better and more useful than the first.

I'm knowledgeable about medieval costume, have made stuff before and don't have MTA1:
Do you do early medieval (pre ~1340) or later medieval (from ~1340 onwards)? If earlier, neither edition will add much to your knowledge, so you can probably skip it. If later, I wholeheartedly recommend the second edition, though perhaps not as an essential buy. Yes, methods for making a lot of these garments are available on the internet or via a re-enactment or SCA group. However, it's always good to see someone else's interpretation of how to do things (and these interpretations are totally different to those made by Robin Netherton, Tasha Kelly, Charlotte Johnson, etc. with their gothic fitted dress hypothesis).

I'm a beginner or someone who sews for LARP/renfair/theatre and have MTA1:
Buy the second edition sooner or later. There's enough extra patterns in it that it will almost certainly be useful for you, particularly if you want to make the garments not in MTA1, upperclass 15th C garments and/or if you are costuming for plus-sized individuals.

I have MTA1 and am knowledgeable about medieval costume or do re-enactment (or other situation where authenticity is important):
Do you do early/mid (up to ~1385) or later (~1385 onwards) medieval? If you do pre-1385 then MTA2 will not add to your knowledge. In particular, there is very little new 14th C stuff in MTA2. I'd only buy it if you're a serious historical costumier and are interested in comparing and contrasting people's interpretations of historical costume. If you do post-1385 then you may still find MTA2 worth buying, particularly if you want information regarding 15th C fashionable women's headdresses or 15th C heraldic and livery garments. If you can't afford to replace your MTA1 just yet, be aware that for some time Sarah Thursfield has very kindly been offering some revisions to it for free via her website.


This post is cross-posted with permisssion at the Cardiff Castle Garrison's blog.
Posted by Miriam at 12:00