Tutorial: how to make perfect facings

Facings are something that can initially seem quite tricky to sew, particularly if you are a beginner. However, they can add a lot to your garment, both aesthetically and structurally. So, here’s a tutorial that’ll show you how to sew perfect facings every time.

What? Facings are an additional strip of fabric that is applied to the inside of a hem. They can be used to add aesthetic interest but are often also structural. They are often used to support edges that have either buttonholes or eyelets along them. They are also used to prevent curved and/or bias cut edges such as necklines from stretching and deforming with wear. Their use on necklines can also act to protect the underlying fabric from sweat, make-up, etc.  Unlike bindings, facings are sewn so that they sit entirely on the wrong side of a garment and cannot be seen from the outside:


When? Facings have been found on late 14th Century textile fragments excavated in London. These include some pieces that appear to be necklines, a strip that has eyelets in and some pieces (probably the lower halves of sleeves) that have buttonholes in. They are all silk on wool fabric. However, this is probably because the London soils only preserved silk or wool fibres, not linen. There are examples of scraps of woolen fabric with buttonholes, with stitch holes; it is theorised that these pieces had linen facings that have since rotted away in the soil.
What? Unlike modern facings, medieval facings are not shaped and are not made from bias-cut fabric. Instead, the facings are made from strips of tabby-woven silk fabric cut on the grain or narrow, tabby-woven silk ribbon. Facings for edges with eyelets or buttonholes are generally wider (e.g. 5/8″ to 7/8″ wide) whilst those on curved edges such as neck holes are narrower (e.g. 1/4″ wide) to accommodate the curve without puckering. They are sewn on using running stitch and/or whip stitch. Sometimes they are kept flat by top stitching along the edge, using a stabbed running stitch. The edges with buttonholes also usually have tablet woven edging in silk or linen applied as additional reinforcement and decoration.
How? This will show you how to make facings. Having not seen any extant examples in person, I can’t guarantee that this is exactly how the medieval ones were done. However, this does makes nice, neat facings. You can adapt it, e.g. by sewing on the facing with different stitches or by using a narrow, tabby-woven silk or linen ribbon instead of fabric.
1) Mark your edge: 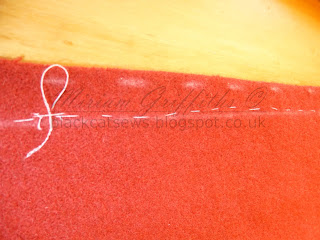 Mark the edge in chalk (with a ruler, if it’s supposed to be straight, free-hand otherwise), neatening the line you’ve already got (i.e. the white tacking) from pinning/draping the garment. Next, tack along the chalk line in a contrasting colour to create a more permanent line. Tack in cotton or another natural fibre, so you don’t risk melting the tacking threads and smearing them across your iron and fabric during the ironing stages later.
Next, mark a 1/2″ seam allowance on the outside of this edge (dotted white chalk line) and cut the seam allowance down to this line, so that it’s even all along. If you have fabric that frays easily you may need more than 1/2″.
2) Cut the facing:
Next, take your facing fabric. You can use silk or linen, but the fabric should be fairly densely woven (no gaps between the threads of the fabric) and not too limp or weak – remember, the facing is structural as well as decorative. Cut a strip that is an absolute minimum of [2x seam allowance] longer than the hem you want to face and is as wide as [finished width of facing + 2x seam allowance]. If your fabric frays easily, you may want to cut it a bit wider/longer and trim down later.
Whatever width you choose, make sure that the finished facing will be wide enough for any buttonholes/eyelets you want to put in it. If doing buttonholes, you may need to make a practice couple first to check what is the smallest size buttonhole that your buttons will fit through.
Cut the facing on the grain and as straight as possible. You may want to pull a thread to achieve this.
3) Pin on the facing: 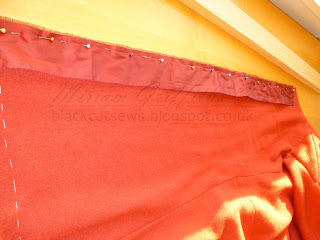 Pin the facing to the garment, right side to right side. That means that once you’re done pinning, the facing will be on the outside of the garment. This bit is absolutely critical. As you’ve got a straight seam allowance on the garment that is a perfect, even 1/2″ from the finished edge and a perfectly straight, perfectly equal-width strip for the facings, it’s just a simple matter of lining up the two edges.
4) Sew on the facing: Sew along your solid chalk line / contrasting tacked line using back stitch or running stitch. You can use silk or linen thread, waxed with beeswax if you prefer. Your facing should not end, e.g. at the top and bottom of the finished garment, but should continue into the seam allowance on either side. This will make the edges of the hems neat too. 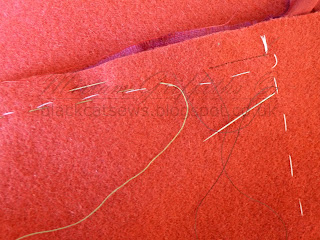 My photo is a little confusing, so I’ll talk you through it. My red silk facing is underneath the brighter red wool fabric and is peeking through at the top edge. The white tacking is left over from draping. The green tacking is marking my new, straight, final edge (the chalk having already rubbed off). I am sewing the facing on using back stitches in dark red silk thread, following the green tacking line. You can also see a bit of a pin above the tacking on the left. (And no, you don’t need to make your stitches quite as tiny as that unless you want to…)
5) Iron the facing flat, then iron it around to the inside of the garment: You’ll start with a slightly rumpled facing, like this: 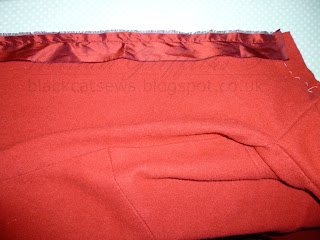 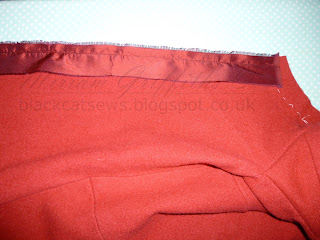 Next, iron the facing over the seam allowances (i.e. towards the top of the photo, towards the edge of the garment). It should now look like this: 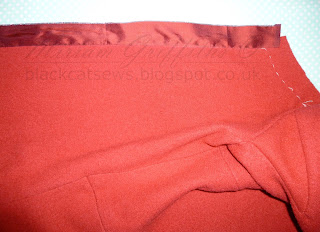 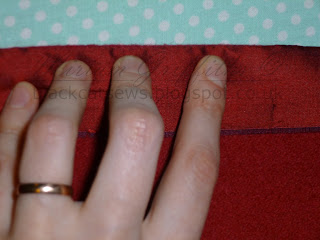 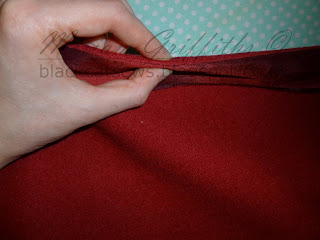 You may need to tack this (as I did) as ironing may not be sufficient to make it lay flat, particularly if you’re using silk and thus avoiding high-heat or steam ironing. Finally, turn the remaining long raw edge of the facing under, using the iron. You want to ensure that the finished facing is a consistent width throughout. 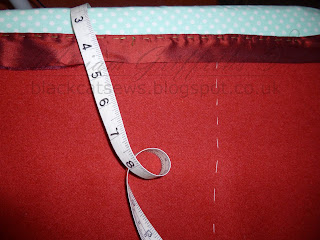 Now, that bit might have been confusing, so here it is in diagram form, if that helps: 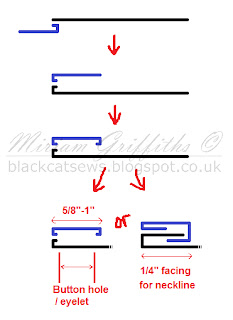 (Note: if doing a buttonhole facing, ensure that you make it wide enough to accommodate buttonholes that will fit your buttons in. Although 5/8″-1″ is historical, there’s no point in making your facing that size if it means your buttonholes won’t fit on it.)
6) Sew down the facing: Use whip stitch or running stitch to sew down the facing. These stitches should not be visible from the outside. You should pin and/or tack the facing and then you won’t end up with creases in your facing like I have. 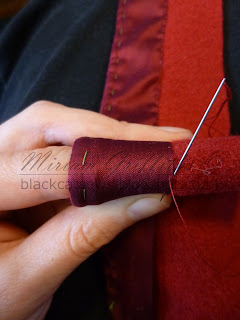 7) Optional extra: top stitch the edge: You may need to do a stabbed running stitch along the edge to make it stay flat and neat. These stitches should be about 1/8″ from the edge, quite small and as neat as you can do them as they will be a decorative feature on the outside. You should use silk, linen or wool thread (not synthetic) as the stitches will be visible (I’m using a 60/2 nm silk thread from the Handweavers’ Studio, waxed with beeswax). 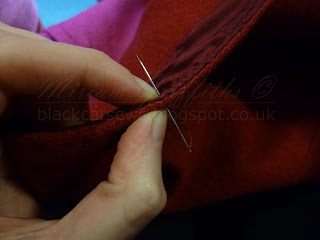 If you put a tablet woven edging on this hem you may find that this keeps the hem neat without the need for top stitching.
By the end you should have something like this, outside (top) and inside (bottom). You can then put buttonholes or eyelets in it, but remember to offset your eyelets for spiral lacing. 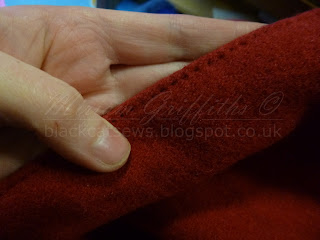 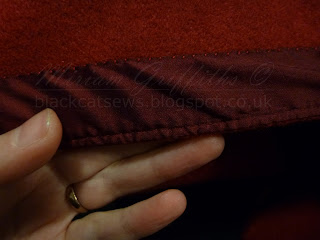 This post is cross-posted with permission at the Cardiff Castle Garrison's blog.
Posted by Miriam at 13:59