Last weekend I finally managed to find the time and got out my wedding dress. I was quite concerned that it would no longer fit as I've lost just over 2 stone since last year. Also, I needed to check its state. It was always intended to be a re-enactment dress after it was a wedding dress, but there is some minor damage that needs fixing (namely lost buttons). Also, as it was very much rush-finished (I sewed the eyelets and hem the day before the wedding!), there are bits that need re-doing or that were skipped which need doing now.

But, seeing as I had it all on, I thought I'd get Himself to take some photos so you could finally see it properly.

Here is the shift, which is of some fairly cheap and unpleasant white linen from Bernie the Bolt. I chose it mainly because a) I was running out of time to find fabrics, b) most of the fabric budget went on Himself's silk (!) and c) it is not see-through (which I was concerned about at the time, though I'm not really sure why). Somehow it ended up ENORMOUS ... not sure quite how. Also, as I seem to have a habit of doing, the neckline ended up overly large. It doesn't matter too much as it holds in place fine with the dress over top. 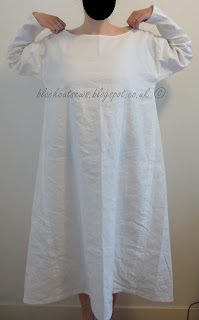 The shift is just a plain rectangular construction: 1 rectangle for the front and back, 1 equilateral triangle gore in each side which reaches nearly to the armpit gusset (like, maybe 1" off) and 1 trapezoid per sleeve. As the sleeves are tapered throughout their length, the armpit gussets had to be kite-shaped and ended up tiny. In future, I would just make a bigger, square gusset and have a rectangle for a sleeve, with any tapering kept to after the elbow.

One thing I do like about this shift compared to my previous one is that it is mid-calf lengthed, instead of to the top of the foot, so it is much more comfortable in dew and (presumably) mud with little impact on leg warmth (provided you wear hose).

Then, the dress itself (note, I seem to have it on slightly twisted in these photos). (Also, I'll mention again: due to real-life work hitting at a very inopportune moment, very little of this dress ended up being my handiwork. Himself draped it on me, under my direction, and sewed the majority of it too.)


Overall, I'm quite impressed as to how the "gothic fitted dress" cut held up to a fairly large change in weight and shape. The inability to weather weight change had been one of my main reservations about believing it to be a medieval dressmaking method, but it seems to have worked ok.

I can only find one reasonable photo of how the dress originally fit, but you can see that although it still fits now, the actual fit/shape/silhouette has changed quite dramatically from last year, particularly in the bust region but also in the armscyes and upper arms.

The dress was based on the lost brass of Joan Ingham, c. 1365, and will eventually have a lilac-blue tippetted dress to wear over it. It is made from Medeltidsmode's "mellanblå" melton, sewn with Gutterman's silk thread (white for long seams, matching blue for visible stitching e.g. eyelets) and faced at the neckline, centre front opening and button/buttonhole openings with the same linen used to make the shift.

It was draped along similar lines to the straight fronted "Gothic fitted dress" method espoused by places such as cottesimple.com, but everything was draped in the actual wool (no toiles!) and I was always standing. I always thought the lying down phase of the gothic fitted dress method was stupid - I can hardly image noble  medieval ladies being told by their tailors "Now, if you'll just lie down on the floor..."

There was a minor rather major hiccup in draping the sleeves of both this and Himself's silk tunic. So, the armscyes and upper sleeves are not really cut as originally planned and don't follow any particular method (modern or historical). I'll show you more detail about that some other time.

We were really quite proud of the buttoned sleeves - super-skin-tight lower arms with each button touching its neighbour, as in the effigies and brasses, and short "mitten cuffs" like Joan Ingham.

I made the buttons by adapting Katrin Kania's method, which is more fabric-efficient as it uses squares (1" in my case), but also seems to give smaller buttons for a given thickness of cloth than circle-based methods (at least in my hands). Himself attached the buttons using a modified version of the instructions in the MoL Textiles & Clothing book and followed the instructions in that book exactly for the buttonholes. (The buttonholes worked wonderfully on this wool, but terribly on his silk brocade - we are going to have to replace the lower arms after only 2 wears.)

The sleeves are so tight that I can't do them up myself - they have to be done up with the arm held out straight and I can't reach the buttons myself when doing that. Originally, having the button on the narrowest point of the wrist done up almost always resulted in me being painfully pinched. However, once done up I have full movement without firing buttons at unsuspecting individuals...

Also, an interesting point, obvious in retrospect, is that I can't style my thigh-length hair myself once I've put the dress on - it's impossible even to comb my hair to detangle it as it gets caught in the buttons. So, either you must do your hair then put on your dress or, as in the Lutterel Psalter, get a maid...

Anywho, so you have finally got to see my blue wedding dress. Maybe sometime I'll be able to persuade Himself back into his wedding clothes so you can see that too.
Posted by Miriam at 20:55